A distributed ETL? Why? How? Would you recommend? ✅ ❌

I came across a challenge recently, to explain to a potential pen-pal, about a certain project I had completed recently. The caveat to this question was that the receiver of the communication was someone who was interested in your work, but not necessarily familiar with the terminology. I thought it was a useful exercise so I thought I would share a modified version of my submission. I encourage many of you to do the same!

A recent project we took on, was to build a distributed ETL from scratch, deployed as composable Go services. This sounds confusing… To simplify imagine this, the application, has a database behind it which is a noSQL database, and our analytics and data science teams wanted this data in a SQL database (a noSQL database is like storing each user’s information in a fancy text file, whereas a SQL database is more like an Excel file, where data is more organized and structured).

The key parts of ETL are Extract, Transform, and Load. Extract takes the data in a particular format and gives the rest of the system access to it; Transforms take the new messages and modify them to be more useful for the consumers of that data; Loaders deal with formatting the data correctly for where it will be stored or used.

And so we began to design the project. We started with some of the following constraints:

With all of the above constraints in mind, we came up with a few architectural plans. Some of them were:

We ended up choosing the Go microservices with the message broker. The reasons for doing so were the clean separation of concerns enforced in the architecture, the performance that Go is so renowned for, the ability to easily replicate to scale various parts of the system depending on what was being loaded, and the resiliency (more on this later) of a pub-sub message broker. Finally, a big concern was that metrics would be streaming to the analytics environment in real-time instead of waiting for a large dump of the data to complete, resulting in the ability to measure nuanced experiments as they happened. 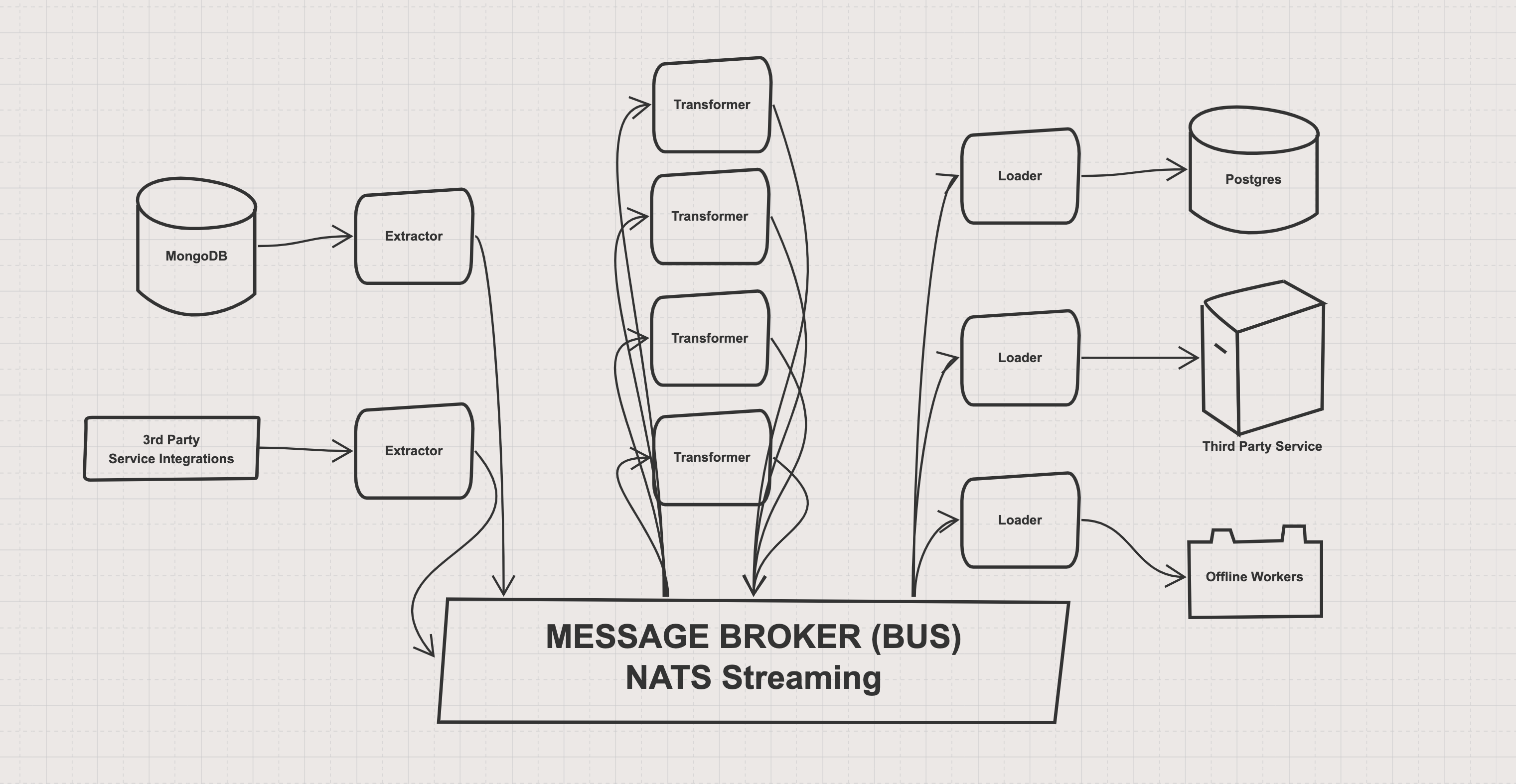 “Great! Looks like you’ve built a solid solution!” - you may say to me. What’s not to like?

There is a lot to be proud of here. The architecure scales well. The separation of concerns enforced in the architecture is beautiful. The (not pictured) ability to send one message to multiple places, and transform each set of messages to work for each loader makes extending data pipelines dead simple, with a clear code pattern. The use of Go for the solution and an open-source technology for a message broker is performant and minimal.

But with hindsight being 20⁄20, we had implemented a fatal flaw. We used a very young technology (that we self-hosted) for our message broker - NATS-Streaming. There was a few major problems with it:

Again I want to re-iterate how proud I was of what we built. I thought the lessons learned, would be useful to others considering a similar path. We eventually ended up switching to a much more durable set of SQS queues, that came with out of the box monitoring, and it has alleviated many of our problems.

There’s another (more personal) takeaway from all of this work that I would like to share. When you empower teams to access data, they will inevitably want more, and it will inevitably lead to more work for your data teams. It’s more important than ever, that companies treat data like a product, something that’s always evolving, and meant to be used by teams to deal with particular problems and pain points. If data isn’t a first class citizen, it will always feel like it’s lagging a company’s progress. I might be slightly biased.

Older
Dendrons are Trees (or are they?)
comments powered by Disqus